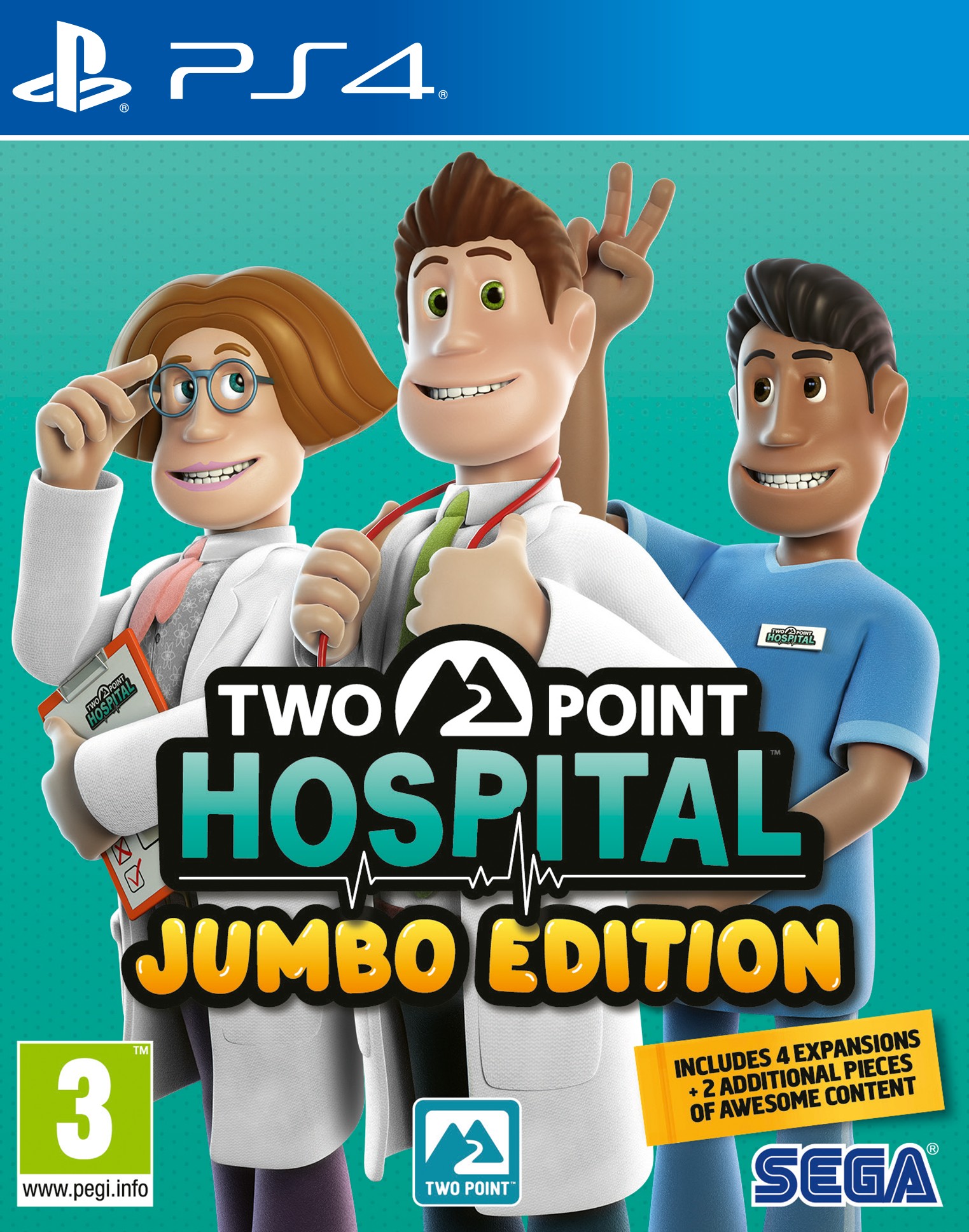 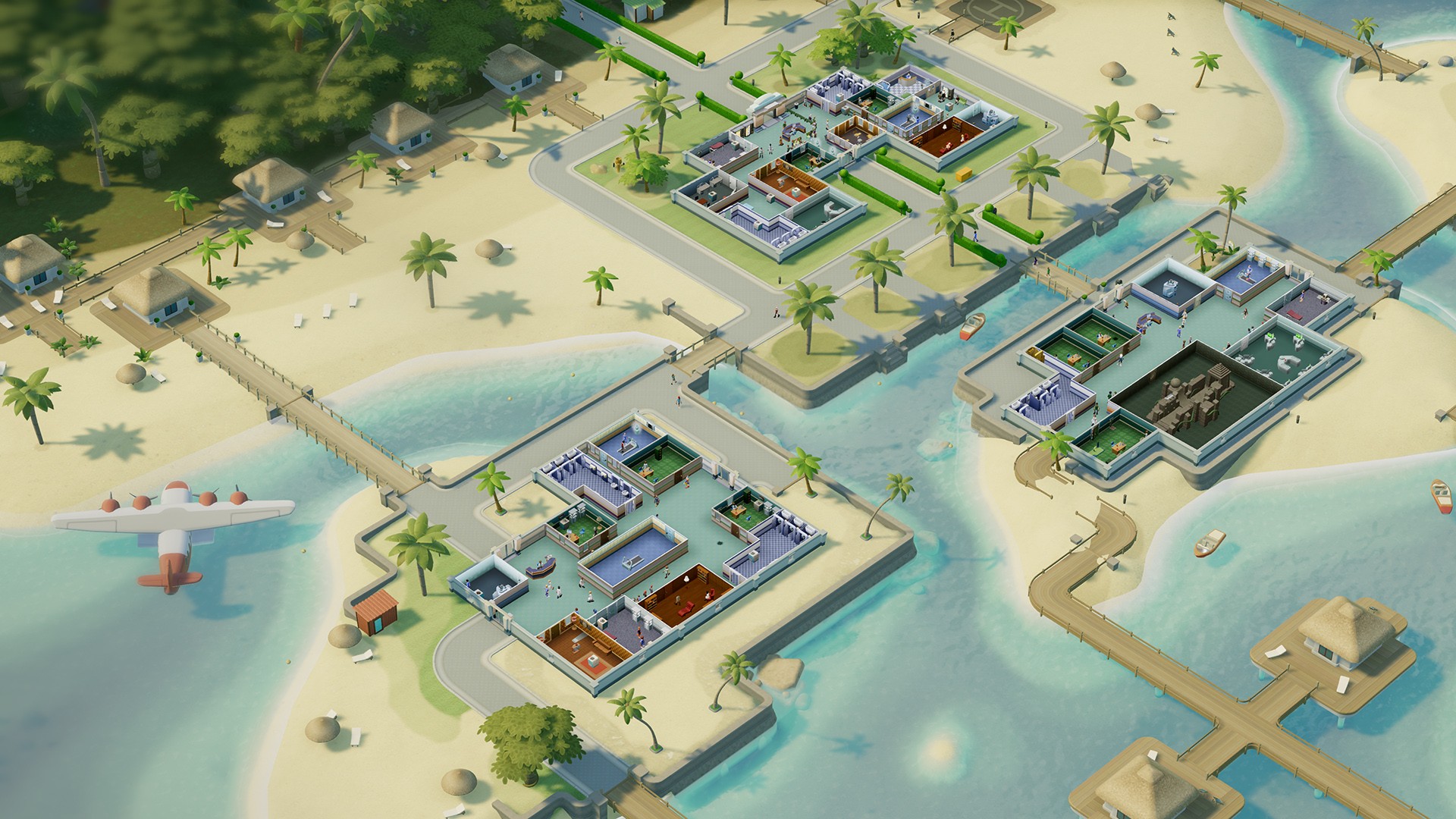 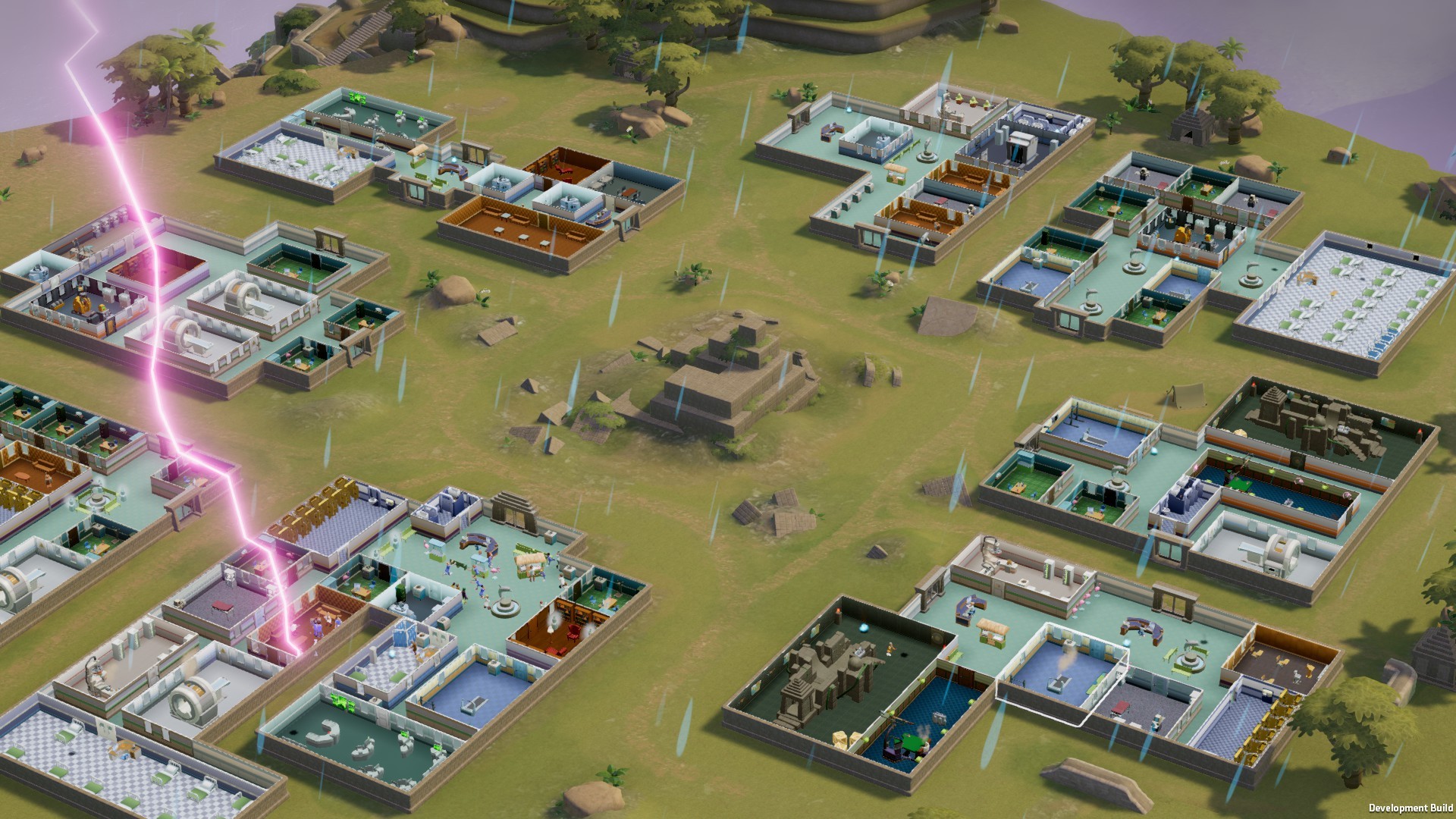 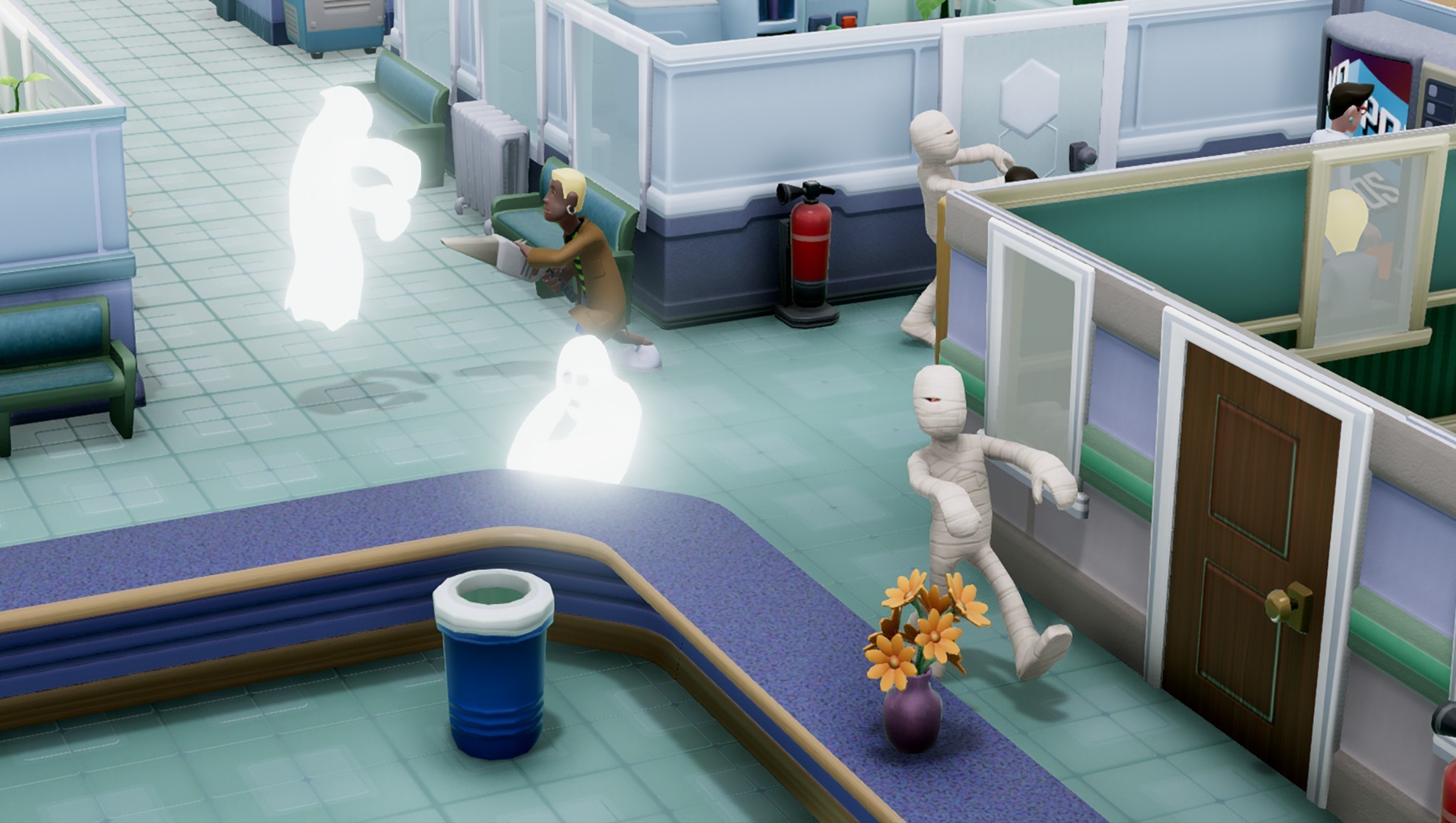 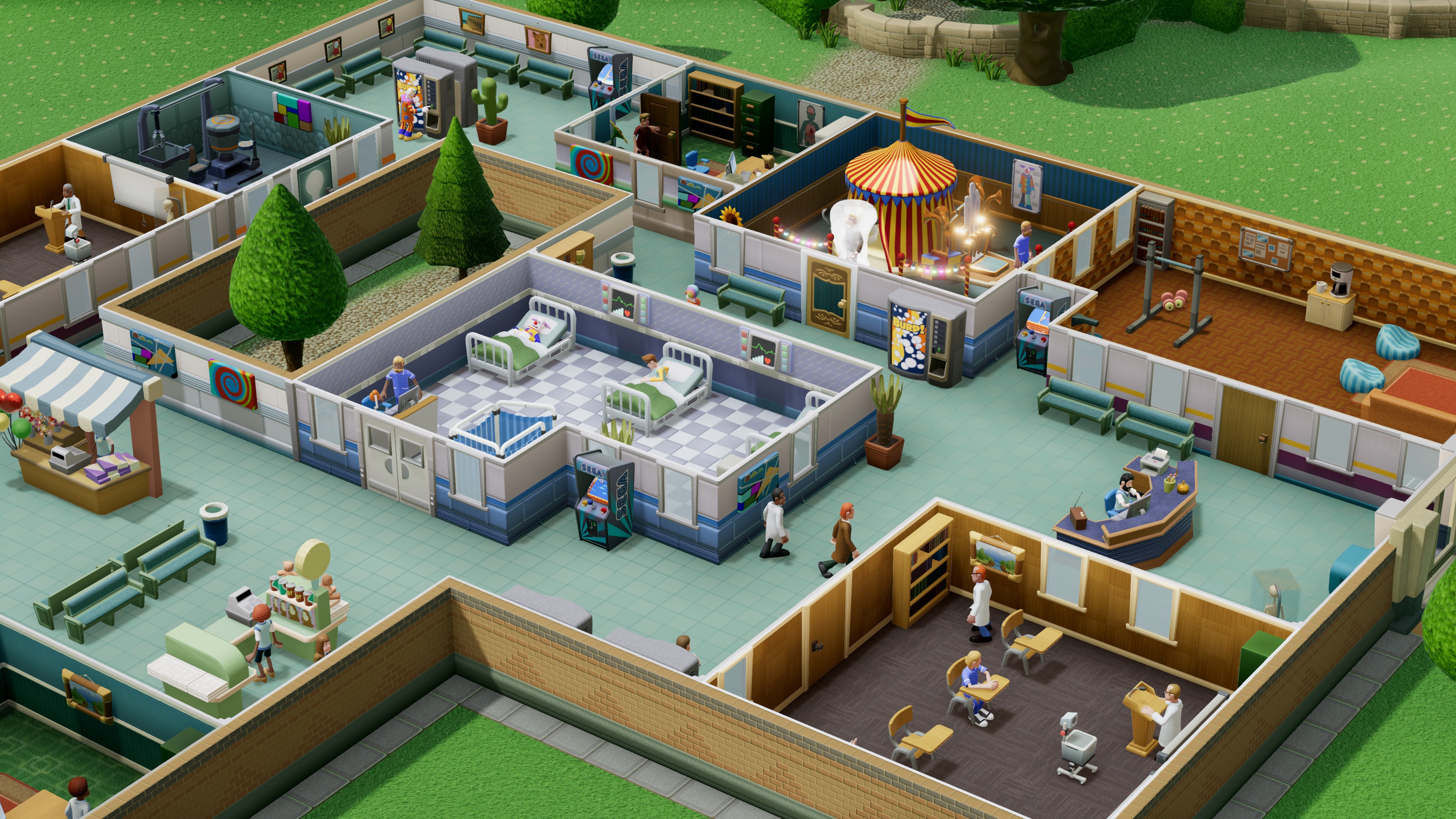 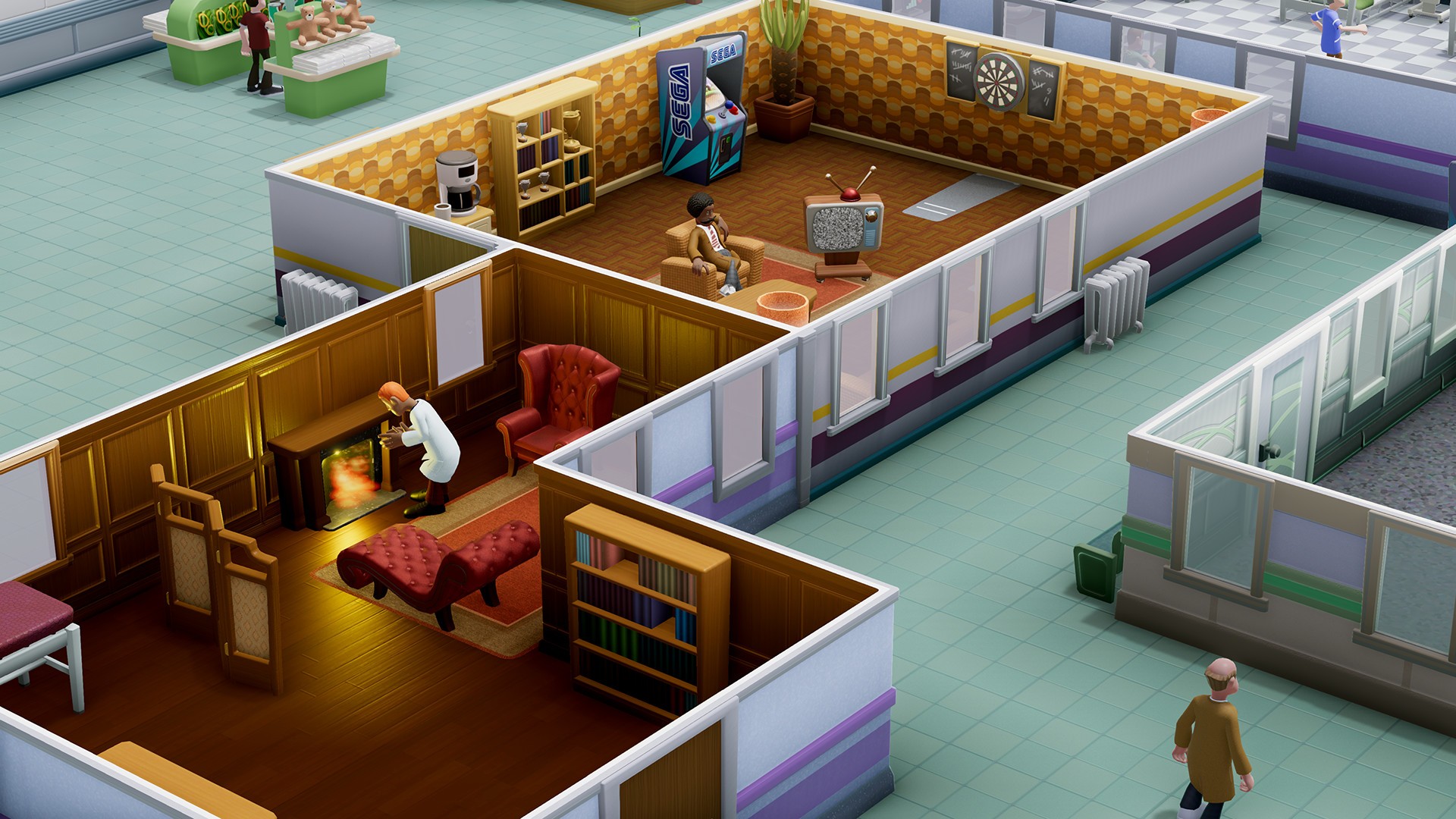 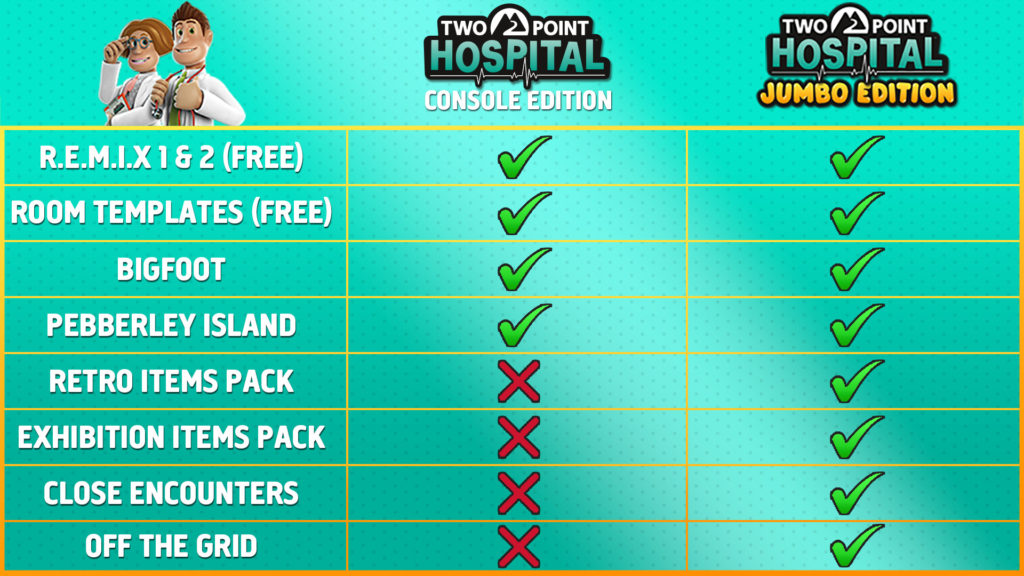 From Hogsport to Blighton, from Flemington to Smogley, from here to remote corners of the Wanderoff County Park, everyone is talking about Mother Nature. Tabitha Windsock, Two Point County’s every-present mayor, has put rivers and forests back on the map with her sudden concern for ‘green-issues’. She’s got morals, integrity and, above all else, a cloying desperation to stay in office. That’s right, voter research has repeatedly suggested that the environment is the No. 1 issue on everyone’s mind, here in Two Point County, and Ms Windsock is more than willing to fall on the sword of extensive positive press by founding the Department of Green Things.

You’ll face new illnesses, some of them bizarre, even by your standards, and manage new gameplay mechanics on your route to eco-friendly success. We believe in you, and Tabitha does too (sort of).

Down in the town of Goldpan, rumours persist of an out of this world encounter. A fireball, witnessed streaking above the sandy climes of Two Point County’s Eastern reaches, is chief suspect after a range of unusual illnesses have caused strife, commotion and general unrest amongst the inhabitants of this oft-forgotten town.

As an all-round medical supremo with a knack for tackling the unreal, your administration has operational access to some key locations in the area… including some areas the public really don’t need to know about. The Two Point Squabbler, the County’s finest journalistic institution, wants to know what’s going on… and you’re their ticket in.

Blaze a sterilised trail through a tropical island for an eccentric millionaire in search of a fabled source of death-defying water. Part-time explorer and notorious germaphobe, Wiggy Silverbottom, is on a quest to discover the secrets of eternal life. As a hospital administrator with a flair for the unconventional, Wiggy needs your help to unlock this most majestic of bounties. Expand your medical frontiers. Experience new sights. Yearn to discover the greatest secret of all.

Local celebri-yeti Bartholomew F. Yeti, the otherwise reclusive furball, has been petitioning for better healthcare in the Pointy Mountains, home to the most frequently forgotten people in all of Two Point County. Mr Yeti will need your help, curing new illnesses such as Cold Shoulder, Bard Flu, and Aurora Snorealis!

Turn back the clock with this delightful collection of 26 new retro and vintage items to place in your hospitals.

Here’s just a selection of some of the items in the Pack:

What is Art? Sure, it’s paintings and sculptures and things like that. But really… what is Art? Well, rather than dip into that profound can of worms, we’ve summarised our answer with a lovely collection of items.

Here’s just a few of the items in the Exhibition Pack:

The free update is coming to all console platforms regardless of whether you have the JUMBO Edition or not! So don’t worry if you can’t afford it right now, or you’re not sure if it’s quite right for you, everyone gets something in Two Point County!

Room Templates is arguably the most popular feature the Two Point Hospital community have requested, and we’re super excited for console players to experience them too. Build yourself a stunning room, save it as a template and place it in any of your other hospitals! Room Templates make building your dream hospital so much easier, and have really enhanced the way you play the game. In the main game, we recommend having a template for each of the rooms you used to have to build at the start of every hospital (looking at you, GP Office!), that way you can quickly put your rooms down and focus on more important things like… are there enough Cheesy Gubbins to go around?

Don’t forget to share you template with us on our social channels too, we can’t wait to see the awesome rooms the console community creates!

R.E.M.I.X is a digital recreation of some of your favourite levels:

What do we mean by digital recreation? Excellent question! The good people at Bungle came up with the idea to create a hospital simulator simulation… or something like that… where you’ll complete goals to receive stars. Of course, being digital, these stars don’t actually reflect anything tangible, they aren’t a standardised rating by a recognised board like the Two Point Health Ministry, they’re purely symbolic of progress and an understood practice in video games. Let’s face it, now you know about them, you want them, right?

That’s a whole six levels with interesting, new mechanics to get your teeth into!